Today, we’re bringing you this incredible video from Cody Needham of San Joaquin Wood and Millwork. First hearing about the Granberg Mill from his friend , Cody decided to start out in his business using the Stihl 661, Cannon Super Bar 60′, and the Granberg 60″ Chainsaw Mill, complete with the Granberg ripping chain, first cut and precision grinder.

Blown away by the work that he heard Cody and Jarrid were doing, their good friend Landon, an electrician by trade and videographer in his spare time, asked to film them in action.

While at the local hardware store buying supplies for his chainsaw, the cashier asked if he had noticed the giant oak tree across the street that had been cut down and insisted that he had to check it out. Taking his purchases, Cody walked across the street and saw how the tree’s canopy was deteriorating and that branches had fallen onto the cars that had been parked below it. Because of this, it had been deemed a hazard to the public and a removal permit was issued to the owner.

Right then and there, Cody and Jarrid struck a deal with the owner to remove it, borrowed a crane, and then took the trunk to Cody’s house. Measuring in at 21ft long and 57′-75′ wide, the crotch of the tree is so wide that they’ve decided to upgrade to the Granberg 84” mill so that they will be able to run 2 heads.
Cody’s end plan is to slab it all out, dry it, and then eventually sell a few slabs and build a few custom pieces out of the lumber. 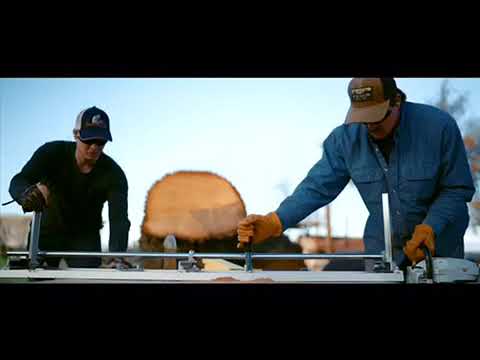